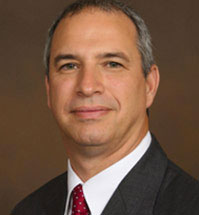 Jorge M Quiñonez, M.D., is Executive Vice President and Chief Medical Officer of Family Health Centers of Southwest Florida, Inc., and is responsible for the oversight of all FHCSWF pediatricians, family practitioners, internal medicine physicians and all mid-level providers. In this role he provides clinical leadership and supervision to all of our Children’s services and Family Practice.

Dr. Quiñonez received a Bachelor of Science degree in 1987 and a Medical Degree in 1992 from Universidad Francisco Marroquin in Guatemala City, Guatemala. He also did a year of Pre-Medical studies at Fordham University in New York City, N.Y. He completed a Pediatric Residency from the University of South Alabama in Mobile in 1995. He functioned as Chief Resident of Pediatrics from 1995-1996. From 1996 to 1998, he did a Clinical Pediatric Infectious Diseases Fellowship at the Tulane University/Louisiana State University combined fellowship program in New Orleans. He also obtained a Certificate of Business Administration for Physicians from Auburn University in 2003.

From 1999-2005, Dr Quiñonez served as Medical Director of the Children’s Medical Center of the University of South Alabama; from 2001-2005 he served as Chief of the Division of General Pediatrics for the Department of Pediatrics of the same institution.

He also served there as a member of the Residency Training Committee for the Department of Pediatrics and as a member of the Graduate Medical Education Committee for the University of South Alabama College of Medicine. He has also been elected and served as president of the Mobile, Alabama Pediatric Society. He has been serving as Medical Director of Pediatrics of FHCSWF since July 2005.

He has been awarded research grants from the Gorgas Tropical Medicine Foundation and from the Children’s Health Foundation and has also participated in several clinical research projects with pharmaceutical companies.

In the past he has been on the board of speakers for Glaxo Smith-Kline. He has numerous clinical publications in major pediatric journals and continues to be a reviewer for the Clinical Pediatrics Journal.

Dr Quiñonez is an avid sports fan, in particular of the game of baseball. He has played Roy Hobbs Adult Baseball both in Mobile and Fort Myers for the last 6 years. He also has great interest in Military History and Theology and enjoys reading on these topics extensively.

Dr Quiñonez and his wife, Claudia, have three children, Jose, Sofia and Elena. Claudia is an architect.

You must have a smart phone and use Facetime or WhatsApp. New and existing patients are welcome to use this new service.

Save time and prepare for your first appointment.
VIew Forms

Limited number of masks are available for free at each location while supplies last.
Learn more